The author of the New York Times number one bestseller Disloyal tells the behind-the-scenes story of what can happen to you — and what really happened to him — when a President who believes himself to be above the law decides to go after his critics . . . .

This is a signed limited edition of Revenge: How Donald Trump Weaponized the Department of Justice Against His Critics.
There is a starburst on the jacket indicating that it is a limited edition. Each copy is signed by the author.
Order Now 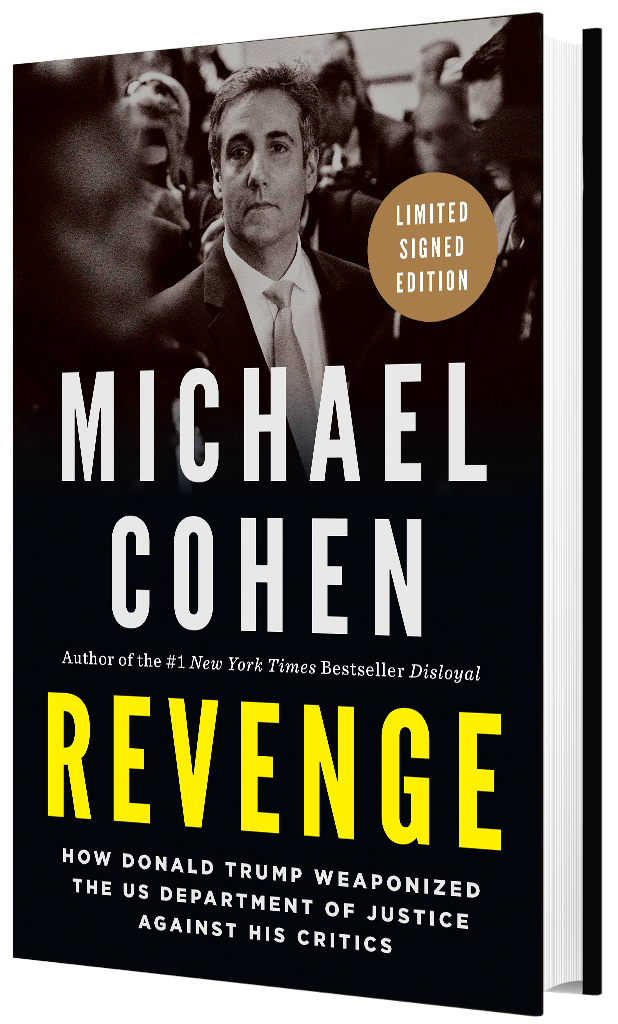 Michael Cohen is the principal of Crisis-X, a crisis management company. He acted as personal attorney to the former President of the United States, Donald. J. Trump, and before that was Executive Vice President for the Trump Organization and Special Counsel to Donald J. Trump. Since his release from the Otisville Federal Correctional Institution, he has authored the New York Times number one bestselling book, Disloyal: A Memoir. He also hosts the top-rated news podcast, Mea Culpa With Michael Cohen, and has become a political commentator regularly seen on major news outlets. He lives in New York City with his wife and two children.

I want to thank Brian Karem, without whom I would not have been able to get the insider information that was essential to get this work completed. He conducted many of the interviews included here. I knew of him peripherally as one of the reporters covering the White House who occasionally sparred with Donald Trump. But I knew he was the guy I wanted to help me on this book after he stood up to Trump and beat him in court three times to keep his press pass. When he asked the important question of Trump, “Will you accept a peaceful transfer of power,” and Trump became the first president in history to say no, I also knew this was a guy who got it and understand the dangers of Donald Trump and the Department of Justice. I also knew that people wouldn’t necessarily want to talk to me at the Justice Department, but would more likely open up to someone who was known for honoring confidences. That, as it turns out, is invaluable among those on the inside who want to see the Department of Justice reformed.

“Michael Cohen has a strong voice in standing up to power and speaking for fairness and justice in the American political and judicial systems. He has seen it all from many angles, and the bumps and bruises have shaped his refreshing, truthful voice.”

“I know Michael Cohen well enough to vouch for him telling us the truth about Donald Trump. No one looks forward more than yours truly to reading these pages.”

“Michael Cohen illustrates that it is never too late to become a truth-teller. He is a parrhessiastes in the true Greek sense of the word — willing to speak truth to power, despite the risk of retaliation by those who would like to see him silenced.”

“Michael Cohen knows Donald Trump’s twisted mind and insatiable lust for dominance better than anyone else. When Cohen writes about Trump we should pay close attention.”

“Michael Cohen's Revenge is like Michael himself: no b.s., right to the point, and driven by relentless energy to tell America the hard truths about why it's so vital to hold Donald Trump accountable for his crimes in and out of the White House.”

“Michael Cohen is on a mission to hold Team Trump accountable and his book is part of that journey. I highly recommend it. It will inspire you to fight for what's right!”

“There's so much more to Michael Cohen's story than many people realize. This time around, Cohen is on a mission. He takes you along for the ride in his uniquely unvarnished style, as he seeks justice and redemption.”

“Michael Cohen exposed Trump's crimes. He testified about them to Congress. He brought receipts, revealing to the American people the campaign finance crimes he committed with, for the benefit of, and at the direction of "Individual #1" — Donald Trump. And Michael paid the price. Yet NO accountability for Trump? This is not how America is supposed to work.”

“
General Mark HertlingNational security and military analyst for CNN, and former Commanding General of US Army Europe and Seventh Army

“I could never understand how only Michael Cohen was the only one held accountable for the crimes directed by Trump.”

“Many people think that they can 'speak truth to power,' but no one does it quite like Michael Cohen. Despite being prosecuted and persecuted, Michael fought back and his latest book exposes in vivid detail how Donald Trump tried to weaponize the biggest law firm in the world, the Department of Justice, to cater to his whims.”

“
Norm EisenCNN commentator, former U.S. ambassador, and co-counsel for the House Judiciary Committee during the first impeachment and trial of President Donald Trump

“Michael Cohen made his amends, and he paid a severe price for it. But that was not good enough for "Individual #1," Donald Trump. He and his DOJ cronies embarked on an ugly campaign of revenge, which Cohen details in this must-read volume”

“Michael Cohen did what far too many around Trump were afraid to do: he stepped forward and shined a light. His words — and his example — should be a lesson to others that it’s never too late to speak up. Indeed, our democracy depends on it.”

“Michael Cohen has become the brutal truth-teller we desperately need at a crucial moment of deceit, lies and conspiracy theories by a former president driven by Revenge. Michael’s story should stand as chilling testimony and as a stark warning of what a vengeful Trump is capable of if he were ever allowed near the Oval Office again.”

“Nobody in America exists at the intersection of Donald Trump and the justice system like Michael Cohen does. Cohen’s experience as Donald Trump’s lawyer, as a defendant in a case tied to Trump’s disregard for the law and, ultimately, as a felon, is uniquely relevant where both justice and democracy in America are in peril.”

On Apple Podcasts, Spotify, Stitcher, Audacy or wherever you listen to podcasts 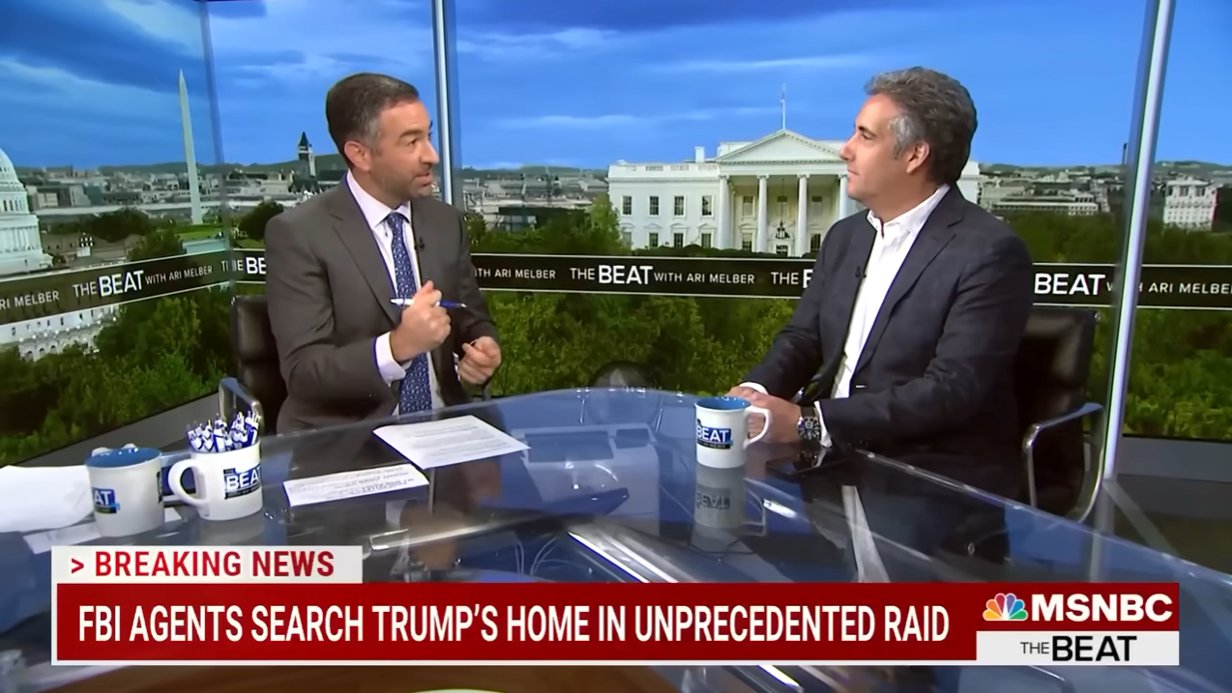 Be a part of the raw and unfiltered ‘Political Beatdown’ with @MichaelCohen212 and @meiselasb conversation today at 9:00am(pst) 12:00pm (est). Click on the @YouTube link: https://www.youtube.com/live/jrDmL9pbbLY?feature=share
@MeidasTouch 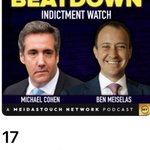 Stay current with truth…And who better to hear it from than former assistant director for counterintelligence at the @fbi. Subscribe, listen, rate and share with your friends! @audioupmedia @Audioboom @ApplePodcasts @Spotify @Audacy @stitcher @anchor @MeidasTouch https://twitter.com/michaelcohen212/status/1622570995671334913 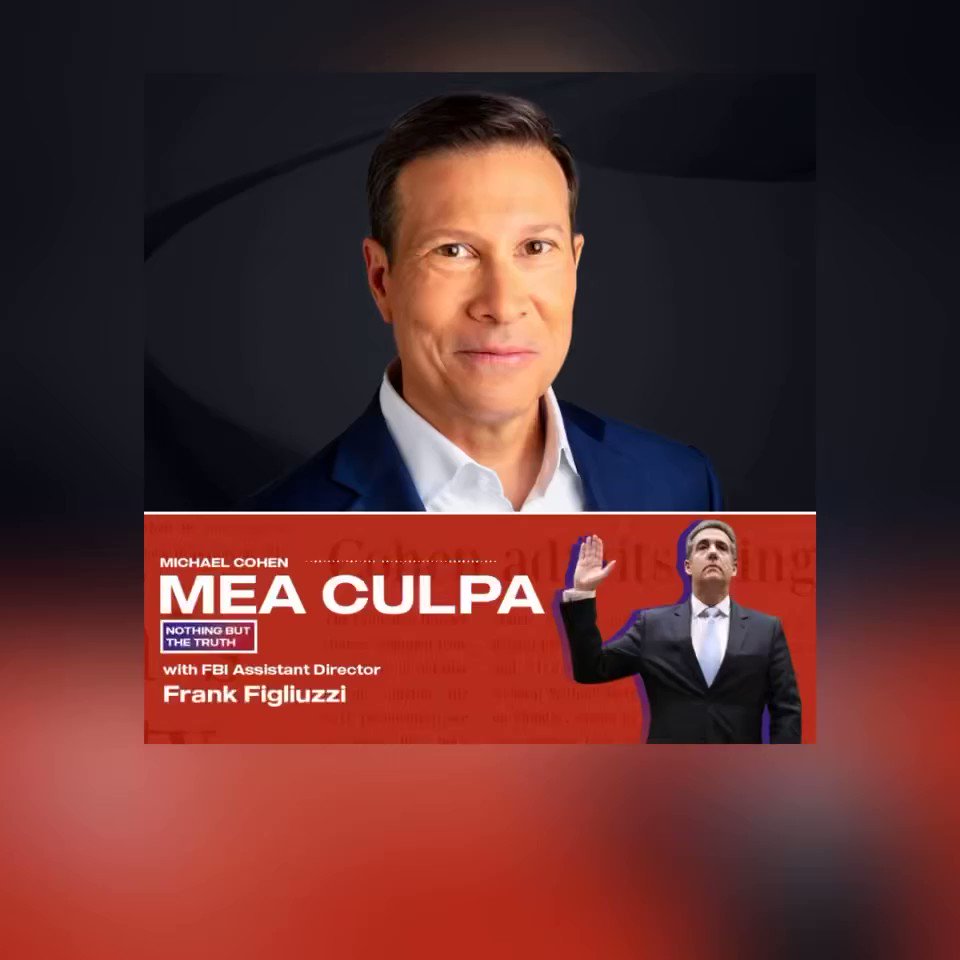 So many questions…with very limited and measured answers. Get them all on the ⁦@MeaCulpaPodcast⁩ featuring former assistant director for counterintelligence at the ⁦@FBI⁩, ⁦⁦@FrankFigliuzzi1⁩. Subscribe, listen, rate and share. ⁦@audioboom @audioupmedia

For tonight’s State of the Union, I am honored to be joined by my guest Pastor Turner of the Mississippi Boulevard Christian Church, who inspired the nation with his stirring eulogy at the funeral for Tyre Nichols and made a rousing call for police reform. 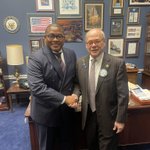 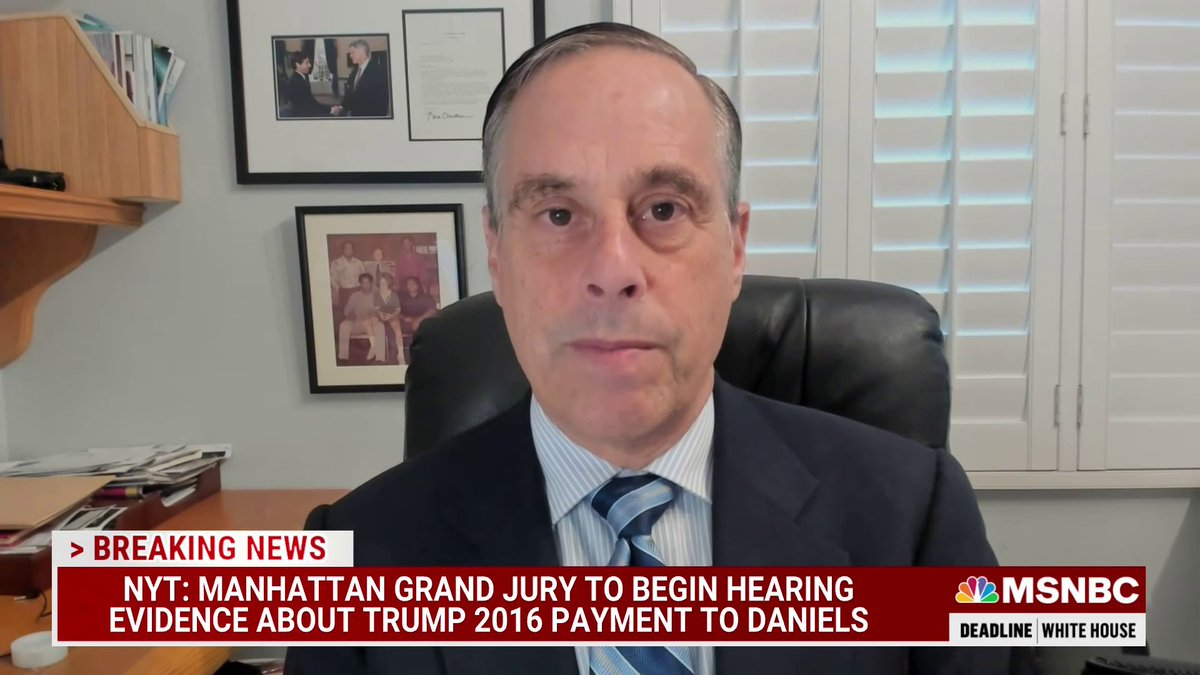 "Bragg has just decided that now is the time and I think if Bragg has made that decision, this is not an exploratory grand jury, he's got to be going for the kill" - @harrylitman w/ @NicolleDWallace

Be a part of the raw and unfiltered ‘Political Beatdown’ with @MichaelCohen212 and @meiselasb conversation today at 9:00am(pst) 12:00pm (est). Click on the @YouTube link: https://www.youtube.com/live/jrDmL9pbbLY?feature=share
@MeidasTouch